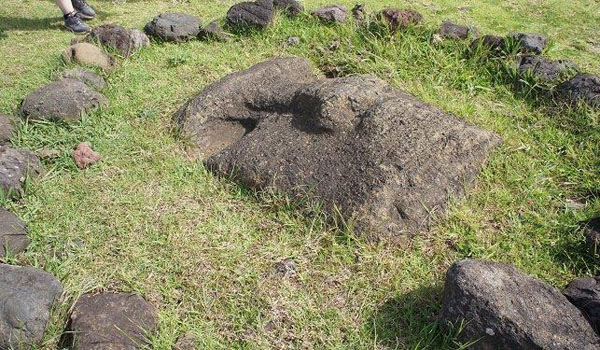 We begin the tour about 3 pm from Hanga Roa’s settlement visiting Ahu Vinapu, ceremonial center with three ahu used for the islanders in the year 1.200 A.C. The first has six moai demolished and painted of red color; the second one has a supposedly feminine moai which had two heads and the third, the most ancient moai, has only removed stones. We will continue our way to the quarry Puna Pau, archaeological site to the east of Hanga Roa. It is a small crater of red dross from where were obtained the Pukao which crowned the moai. Along its antique exit way, there are some incomplete and abandoned moai.

We will go on our tour towards Ahu Akivi, the first Ahu scientifically restored in 1960. The platform with 7 moai is characterized for being one of the few ones located in the center of the island with its statues facing the rising sun. According the legend, these moai would represent the seven young explorers sent before Hotu Matua’a’s arrival to investigate the island.

Our adventure ends at Ahu Huri a Urenga Moai.