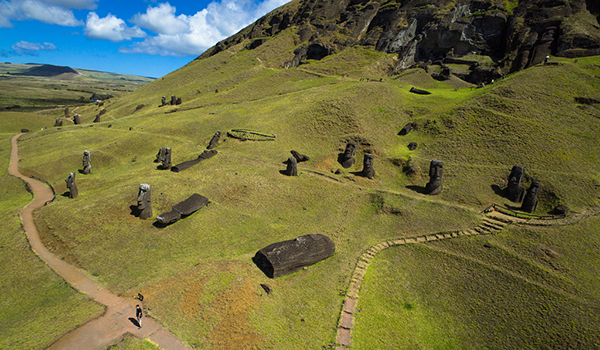 Departing from Hanga Roa’s town at about 9:30 am, going to the southeast and northeast coast of the Island. The first stop is to visit Ahu Akahanga also called “platform of the king”. The legend tells that Hotu Matua’a’s tomb would be near to this place. Here we can see 4 platforms, 12 Moai, 8 Pukao and towards the interior of this Ahu it is possible to see the best preserved village of the island. We continue the tour to the Rano Raraku volcano where were carved the most of the statues. Here you can see about 400 moai in various stages of carving.

Later, we go to Ahu Tongariki the biggest Ahu of the island with 15 moai. Later we find Ahu Te Pito Kura, which possesses the tallest statue of the island raised in an Ahu Moai Paro (10 meters of height and 85 tons with a Pukao of 11,5 tons). Next to this ceremonial temple is a spherical stone identified as the navel of the world Te Pito o Te Henua that, according to legend, was brought to the island by Hotu Matua in his ship. Then, we arrive to Ahu Nau Nau, a complex construction due to its different levels where we find 5 moai with Pukao and petroglyphs in the back of the statues.

To finish our adventure, we go to Anakena. A wonderful beach of white sands (with a pinkish hue, due to the mixture of coral and hanihani rock), chosen for the arrival of the Ariki Hotu Matua’a and his sister Avareipua. Anakena is the name of a small cave next to the beach.

Going back to Hanga Roa, we made our last stop at the Vaitea farm.